It is customary in Canada to form a line when waiting to pay in a store, or waiting for a bus. In fact so ordinary that most Canadians don’t realize that it is not the norm everywhere in the world. 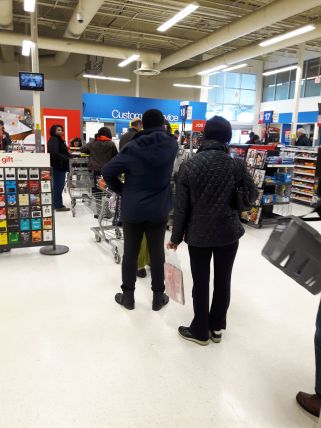 “If you are buying groceries in Karachi” Fatiha says “you gather around the cash counter to pay. There are no lines, and there is no concept of customer service or returning goods, even if they are damaged. They are good shopkeepers, you can chat with them, sit with them. But there, the shopkeepers have the upper hand. Here, the customers have the upper hand. Things are changing there now, though. There used to be a big difference in service between the local banks and the foreign banks, but not as much anymore.”

Ruback agrees “There is no line system back home. You are considered stupid if you are in a line, to be honest. I used to stand in a line, but people will pass you over. Society there is dominated by the people who are more influential. There is no equality concept. Someone who is influential will have a better home, better car, better security, better back up system if the electricity goes out, because that’s an issue too. At home, the wealthier people get taken care of first. You can tell them by the way they are dressed, or by their watches or the cell phone. People carry their wallet and cell phone in their hand to show what they have, they show their rings. The way they behave lets you know that they are influential. Here it’s more equal. I think it is a good approach to make the society survive to have people sit in the same place. Back home the well-off wouldn’t sit with someone who is poor. Even the poor would not sit with the rich – they would feel guilty about it. It’s kind of the mentality. I feel sorry about it but it is not something that could be corrected in one day or even one generation, because in a country like Canada this is an improvement that has been continually happening.”

Bo says “If you are in a store in the Netherlands you would line up to pay, but at a bus stop people just gather at the spot. When the bus stops most people have an idea of who has been waiting the longest, but also the people closest would get on the bus first. It would be orderly with no pushing, but not the strict queuing that you would see in the U.K. or Japan. In the grocery line if you had finished paying for your groceries but were still chatting with the cashier people would be more impatient in the Netherlands for you to move along than they are here in Canada.”

Susan and Jeff noticed in the early years that customer service in Canada was much better than in the U.K. In recent visits there they notice that U.K. service is improving. Susan’s mother loves that you get free refills of coffee in Canada. A cup of coffee is much more expensive in Britain, and you only got the one cup.